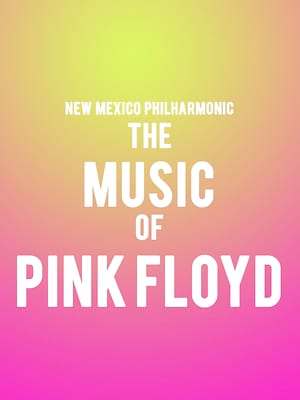 ...one of Britain's most innovative and revered rock bands.

Why See New Mexico Philharmonic - The Music of Pink Floyd?

A CELEBRATION OF THE MUSIC OF PINK FLOYD

Enjoy an unforgettable evening celebrating the mastery of the prog-rock icons in this impressive concert presented by the New Mexico Philharmonic. Featuring expansive and detailed renditions of the group's most beloved songs and works from albums including 'Dark Side of the Moon, 'The Wall' and more, expect a spectacular experience delivered with immense talent and respect.

First formed in London in 1965, Pink Floyd are synonymous with the progressive rock genre, pioneering a sound like no other. Now considered one of the greatest bands of all time, their timeless music has gone on to influence fans and artists across the decades. Combining epic, experimental rock soundscapes with philosophical lyrics, abstract art, and surrealism, the band's myriad achievements have rightly earned their place in the Rock And Roll Hall Of Fame.

Sound good to you? Share this page on social media and let your friends know about New Mexico Philharmonic - The Music of Pink Floyd at Popejoy Hall.