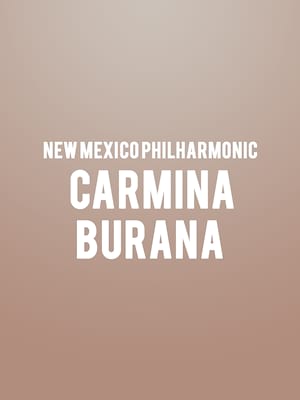 The thing that makes the work unique is its sheer variety and inventiveness: nothing else Orff wrote is frequently played today, and it's as if he poured his entire creative energy into this one work

Easily the most recognizable and crowd-pleasing piece in all the classical repertoire, Carl Orff's powerhouse masterpiece, with its famed O Fortuna! chorus, is at its most essential and vivid when performed in the concert hall. The New Mexico Philharmonic proves it's up to the challenge during their spring Fundraising Special, which also features the NMP commissioned songs from Colin Martin's By Heart.

An adaptation of a group of 13th Century poems, Carmina Burana is dramatic, powerful and indulgent, and has permeated popular culture, having been featured in everything from advertisements to movies, rock music to sports games. One of the most vibrant, hair-raising sonic experiences in all of the classical canon, this medieval-inspired masterpiece is a guaranteed showstopper that will move audiences old and young.

Sound good to you? Share this page on social media and let your friends know about New Mexico Philharmonic - Carmina Burana at Popejoy Hall.