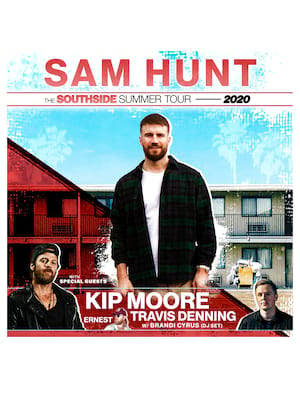 Hunt's breakthrough was propelled by his deceptively radical sound and his relatable lyrics about heartbreak in a small town. (Also his quarterback's good looks.)

Considering his debut album Montevallo spawned a slew of hits including 'Leave A Night On', 'Take Your Time' and 'Break Up in a Small Town', it's surprising that college quarter-back turned country-pop star Sam Hunt has taken six years to release a follow-up. But good things take time, and the singer songwriter's sophomore effort Southside has well been worth the wait. Don't miss the crooner when he hits the road on the headlining Southside Summer Tour featuring support acts Kip Moore, Travis Denning, Ernest and Brandi Cyrus (DJ set).

Hunt has taken a political turn with the new record, as indicated by the searing commentary of its single Sinning With You. Written after he was arrested for DUI in Nashville, it's a soul searching rollercoaster that questions handed-down religious values and thinking for oneself. Balanced out by the romance of lead single Kinfolks, which harbors his trademark big choruses and knack for melodic writing, the album points towards an exciting evolution in Hunt's career.

Sound good to you? Share this page on social media and let your friends know about Sam Hunt at Isleta Amphitheater.